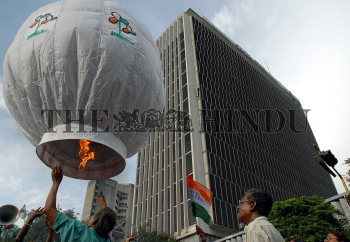 Caption : KOLKATA, 20/06/2007: Trinamool Congress supporters staging a protest by flying a balloon, against land acquisition for the proposed small car project of Tata Motors at Singur in West Bengal in front of Tata Center, in Kolkata on June 20, 2007, calling the revival package announced by the State Government as rotten. Meanwhile, the Left Front leaders are at a meeting at the party office to discuss the economic package for Singur farmers. Photo: A. Roy Chowdhury