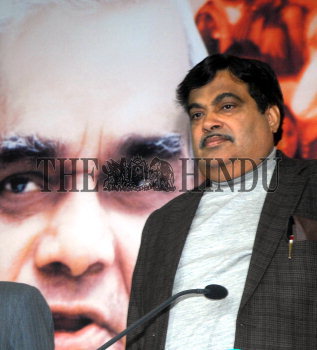 Caption : NEW DELHI, 15/12/2011:BJP president Nitin Gadkari during a function organised by BJP Cell of Ex Serviceman to pay tribute to the martyrs, on the eve of 34th Vijay Diwas to remember those brave soldiers of the Indian armed forces who laid down their lives fighting for the nation. It was on this day in 1971 that the Indian Army, Navy and the Air Force and the para-military forces together achieved a historic victory over the Pakistani forces to creat Bangladesh, in New Delhi on December 15, 2011. Photo: Rajeev Bhatt