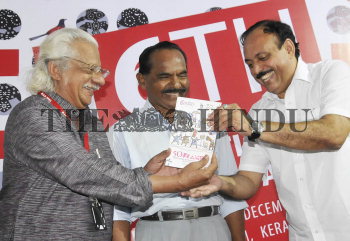 Caption : THIRUVANANTHAPURAM, 15/12/2011: Noted Malayalam Director Adoor Gopalakrishnan releasing a book "50 FRAMES" brought out by (GRAFTII) the alumini of the Poona Film and Television Institute ) on its 50th year of establishment,by presenting it to producer Sureshkumar on the sidelines of the IFFK in Thiruvananthapuram on December 15, 2011. Photo: S. Mahinsha