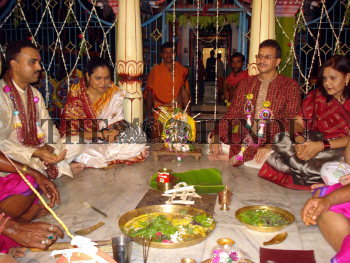 Caption : BERHAMPUR,19/06/2007: Policemen too are religious as Berhampur Superintendent of Police (extreme left) and Ganjam Superintendent of Police (second right), along with their wives performing the marriage of Lord SIVA and Goddess Parvati acting as bride's parent and groom's parent respectively at the SIVA temple near police barracks at Ambapua on June 19, 2007 night. Photo: Lingaraj Panda