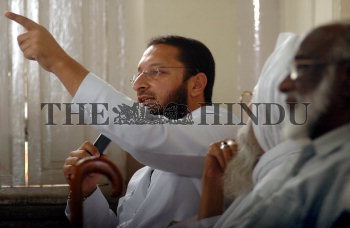 Caption : HYDERABAD-20/06/2007:-United Muslim Action Committee leaders oppose the government's move to categorise the Muslim community on caste lines for the purpose of according reservation, led by MIM leader Asaduddin Owaisi, MP, gestures as he warn the government of serious consequences at a press conference held in Hyderabad on Wednesday June 20, 2007. -Photo: Mohammed_Yousuf