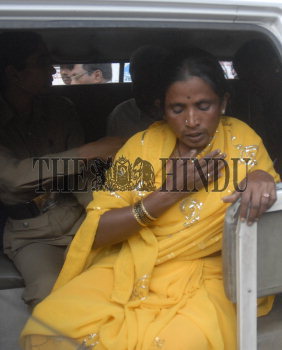 Caption : BANGALORE, 14/12/2011: Activists of the Madiga Meesalati Horata Samiti who were arrested, at the Vidhana Soudha police station in Bangalore on December 14, 2011. They were arrested for throwing pamphlets from the visitors' gallery of the Legislative Assembly demanding internal reservation for 86 lakh Madigas, who form a major chunk of the Scheduled Castes in the State. Photo: V. Sreenivasa Murthy