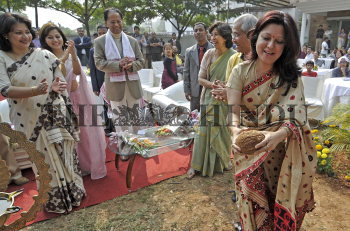 Caption : GUWAHATI, 11/12/2011: Chairperson, Assam State Film (Finance and Development) Corporation (ASFFDC) Ltd Bobbeeta Sharma (R) breaks a coconut at the the mahurat of Baandhon, an Assamese feature film, directed by internationally acclaimed director and filmmaker of Assam Jahnu Barua and produced by ASFFDC Ltd in Guwahati on December 11, 2011. Also seen in the picture (L-R) Minister for Cultural Affairs, Pranati Phukan, Assamese Actress Zerifa Wahid, Assam Chief Minister Tarun Gogoi and director Jahnu Barua (second from right). This film is ASFFDC?s yet another effort to promote Assamese film industry and quality cinema in Assam state. ASFFDC embarked on the project for production of films after a GAP of nearly 11 years and Jahnu Barua will be directing this Assamese film after a GAP of eight years. Photo: Ritu Raj Konwar