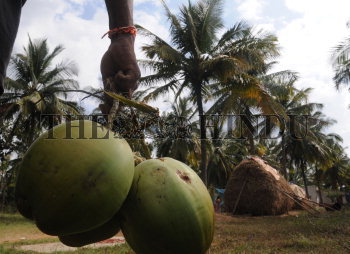 Caption : BANGALORE:11/12/201:A view of Tender Coconut tree farm outskirts of Bangalore on Sunday. No takers ? In Karnataka there are 7.60 crore coconut trees and of which only 49 trees have been insured during 2011-12. The state government has implemented insurance scheme for coconut trees with the help of Central government. The coconut trees are vulnerable to vagaries of weather such as cyclone winds, floods, inundation, landslide, besides pests and diseases. The state horticulture ministry said poor response to the scheme is due to annual renewal of the insurance and also the pay payout is done only when 10 or more trees are fully affected per acre. The state government is planning to seek suitable amendment to the scheme by extending the period from one to three years. PHOTO: G R N SOMASHEKAR