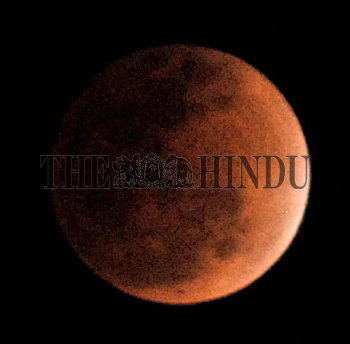 Caption : TIRUCHI, 10/12/2011:TOTAL LUNAR ECLIPSE:The Earth casts its shadow across the moon's surface during the lunar eclipse on a cloudy day in Tiruchi on Saturday, December 10, 2011. The various stages of the lunar eclipse photographed and the Earth's shadow began creeping across the lunar disc, covering it completely between giving it a coppery glow. Photo: M.Srinath