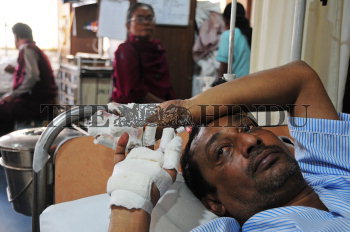 Caption : Kolkata: Bikas Dey, the survivors of the major hospital fire, was still in trauma on Saturday morning in the ICU of the main building of AMRI Hospital, Dhakuria in Kolkata. He was under treatment in the annexe building of the hospital, where the major fire broke out on the wee hours of Friday, killing 89 patients. After sensing the smoke choking the ward, he broke out of the window glass and stood on the panel of the wall and later rescued by the local youths. His fingers were severy injured when he climbed down the wall from fourth floor. The difference between two mornings were strikingly different, which carrying lot of pain, lifelessnes and hope for a better and beautiful life. Photo: Arunangsu Roy Chowdhury December 10, 2011.