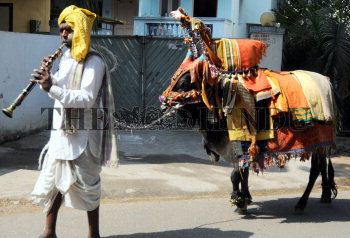 Caption : HYDERABAD, 10/12/2011: A villager travels across twin cities with his caparisoned bull called 'Gangireddu' that indicating the arrival of the all important festival of heavest Makar-Sankranthi festival one of biggest harvest festivals in the country that is spread over 3 days starting from January 13th, in Hyderabad on December 10, 2011. Photo: Mohammed Yousuf