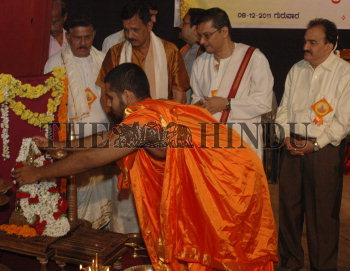 Caption : MANGALORE, 08/12/2011: Vishwavallabha Thirta Swamiji garlanding the idol of Lord Krishna before his felicitation on December 08, 2011. A grand welcome was accorded to Vishwavallabha Thirta Swamiji of Sode Math, who will be ascending the Paryaya peeta in Udupi and do the puja of the Lord Krishna for two years from January 18. He was felicitated at a function later. Photo: R. Eswarraj