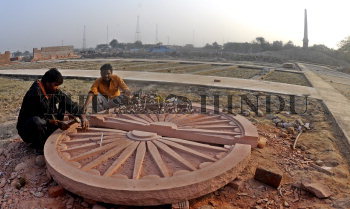 Caption : NEW DELHI, 08/12/2011: Renovation work in progress at CORONATION Park at Burari Road in New Delhi on December 08, 2011. The park is sometimes referred to as the CORONATION Memorial. It was the venue of the Delhi Durbar of 1877 when Queen Victoria was proclaimed the Empress of India. Later it was used to celebrate the accession of Edward VII in 1903, and finally it was here that the Durbar commemorating the CORONATION of King George V as Emperor of India took place on December 12, 1911, subsequent to his CORONATION at Westminster Abbey in June 1911. This last celebration had all the princely states in attendance. The decision to hold the CORONATION Durbars in Delhi at the vast open ground at CORONATION Park was a move to emphasise Delhi's past history. Photo: Sushil Kumar Verma