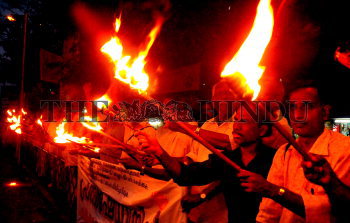 Caption : KOZHIKODE, 06/12/2011: Burning issue: Activists of the Karshaka Sangham staging a protest in Kozhikode city on December 05, 2011, in protest against the ?lethargic attitude' of the State and the Union governments on the Mullaperiyar dam issue. Photo: S. Ramesh Kurup