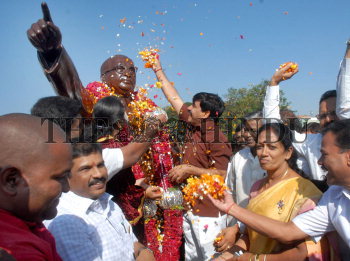 Caption : MYSORE, 06/12/2011: Minister for Medical Education S.A. Ramdas and other elected representatives from Mysore made floral offerings to the statue of B. R. Ambedkar to mark his 55th death anniversary on December 06, 2011. Photo: M. A. Sriram