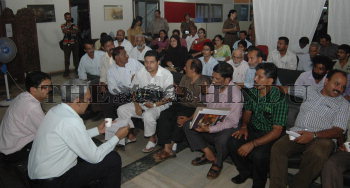 Caption : MANGALORE, 05/12/2011: Family members of the Air India Express plane crash victims meeting S. Chandrakumar, the CEO of Air India, seeking an early settlement of their compensation claims, in Mangalore on December 05, 2011. An Air India Express plane from Dubai overshot the table-top runway at the Mangalore airport and plunged over a cliff into a wooded valley on May 22, 2010. Eight passengers survived miraculously though the plane burst into flames after the crash. Photo: R. Eswarraj