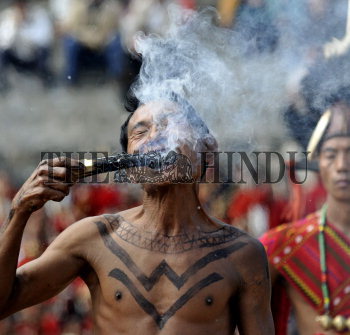 Caption : KOHIMA, 02-12-2011:A fire eater Konyak tribe man bites a burning wood during performance at 12th Hornbill festival celebration at Kisama village in Kohima capital of Nagaland state, northeast India on December 02, 2011. Hornbill festival is an annual tourism promotional event to showcase Nagaland?s traditional and cultural heritage in all its ethnicity, diversity and grandeur. The festival is a collaborative celebration of all Naga tribes at one venue. The festival is a tribute to the great Hornbill, which is the most admired and revered bird for the Nagas, for its qualities of elements and grandeur. Hornbill is closely identified with the social and cultural life of the Nagas as reflected in various tribal folklores, dances and songs. The awe and admiration for the bird is symbolically displayed on almost all tribal traditional HEADGEARS worn during the festivals and is indicative of the commonness amongst the Nagas. Photo:Ritu Raj Konwar