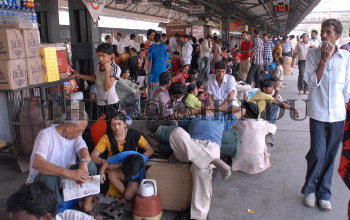 Caption : During the period April 2007 to June 2007 (upto 12.6.2007) there have been 663 trips of special trains run by Northern Railways to clear summer rush giving estimated additional earning of 17.91 crores in addition to 3705 additional coaches. Photo: Kamal Narang