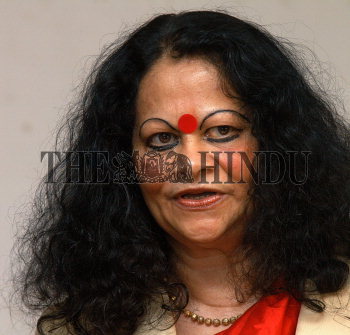 Caption : GUWAHATI, 29/11/2011: A file photo of noted Assamese writer and poet Mamoni Raisom GOSWAMI who died after being hospitalised since past six months. She was 69. Jnanpith Award winner for Assamese literature Indira Raisom GOSWAMI passed away on November 29, 2011 at 7.45 am. Indira GOSWAMI was the authoress of a number of novels and short story collections. She was better known by her pen name Mamoni Raisom GOSWAMI and was a teacher at Delhi University?s Department of Modern Indian Languages. Indira GOSWAMI had also initiated a political dialogue to find out solution for the ULFA (United Liberation Front of Asom) issue which is cause of terrorism in Assam for about thirty years. Photo: Ritu Raj Konwar