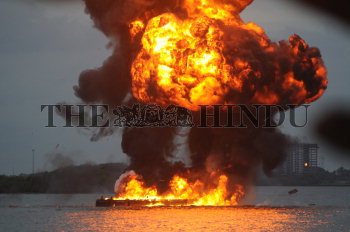 Caption : KOCHI, 27/11/2011: Navy personnel triggering a blast using a timer device as part of the Open Demo 2011 organised by the Navy at Marine Drive on November 27, 2011. The demonstration highlighted the skills and preparedness of the Navy in neutralising conventional and asymmetric THREATS facing the nation. Photo: H. Vibhu