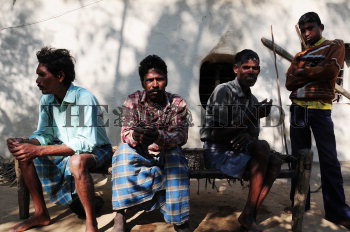 Caption : KOLKATA, 25/11/2011: (from left) Lakhhan Mahato, Darpari Mahato and Haripada Mahato helplessly sitting in front of their home on November 25, 2011. Lakhhan's 21 day old boy is critically ill and admitted in Medinipur Government Hospital. The joint force did not allow them to go out of the village. After the Maoist Polit Bureau leader M. Koteswar Rao, alias Kishan-ji was killed by the joint force personnel in a forest near Burisole village of Jhargram sub-division in Paschim Medinipur district of West Bengal on November 24, 2011, Central Insurgency Force personnel combed the surrounding villages. VILLAGERS were taken out of their home during the operation. Here the VILLAGERS are standing outside when the force personnel raid their houses. Photo: Arunangsu Roy Chowdhury