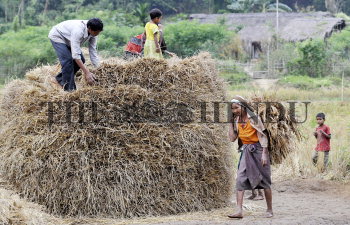 Caption : KARBI ANGLONG?20-11-2011 A Tiwa woman busy stocking their harvested crops in Bormarjong village in Karbi Anglong district of Assam on Sunday, November 20, 2011. Harvesting season paddy in the hills areas of Assam state starts from first week of November and it continues till the end of November. Tiwa community living in the hills practice Jhum or shifting cultivation as well as rice cultivation in plain areas. Tiwa is one of the major tribe of Assam inhabited in the Karbi Anglong and Morigaon districts of Assam state. PHOTO: RITU_RAJ_KONWAR