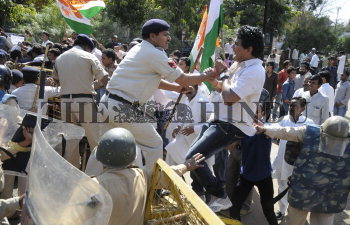 Caption : BHOPAL, 18/11/2011: Congress activists engaged in a scuffle with police during a protest demonstration in Bhopal on November 18, 2011, demanding resignation of Leader of Opposition Sushma Swaraj and Madhya Pradesh Chief Minister Shivraj Singh Chauhan after a court issued non-bailable WARRANTS against Ms. Swaraj, Mr. Chauhan and two others on charges of dishonouring the Tricolour. PhotoL: A.M. Faruqui