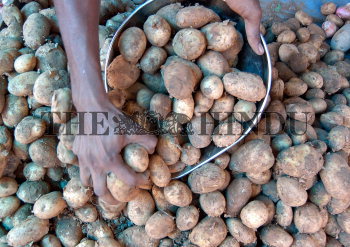 Caption : KOCHI, 13/06/2007: Potato kept for sale at a retail outlet in Kochi, Kerala. Increasing demand for low sugar content potato by processing firms due to higher dry matter that translates into more slices of wafers and fries has led to its mass cultivation across the country. Demand for potato chips has risen to nearly two per cent of the total output from 0.1 per cent 2 years ago. India is worldâs third largest potato producer with 1.28 million hectares with an annual output of 22.49 million tonnes. Photo: K.K. Mustafah