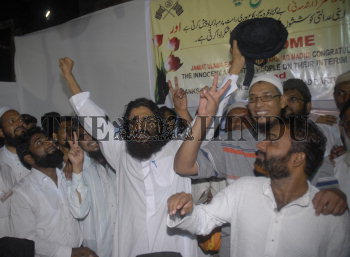 Caption : MUMBAI, 16/11/2011: 5-year-wait ends: Seven of the nine accused in the Malegaon bomb blast case are jubilant as they address a press conference on their release from prison on November 16, 2011. A special Maharashtra Control of Organised Crime Act court granted them bail on November 5 after they spent five years in jail. Photo: Vivek Bendre