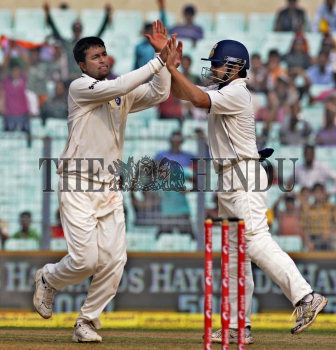 Caption : KOLKATA, 16/11/2011: India's Pragyan Ojha (left) celebrates with Gautam Gambhir after getting West Indies captain Darren Sammy's wicket on the third day of the second cricket Test match between India and West Indies at the Eden Gardens in Kolkata on November 16, 2011. Photo: S_Subramanium