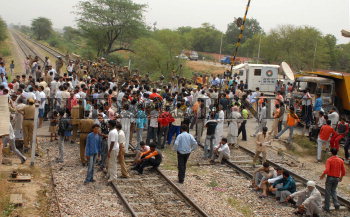 Caption : VILLAGERS block road and rail traffic at Shahabad Mohammedpur village near the Indira Gandhi International Airport in Delhi. The VILLAGERS were protesting against the proposed expansion plans drawn up by the new joint venture company which has been given the mandate to modernise the airport. The new joint venture operator requires the area for construction of the third runway in the capital on June 12, 2007. Photo: Kamal Narang