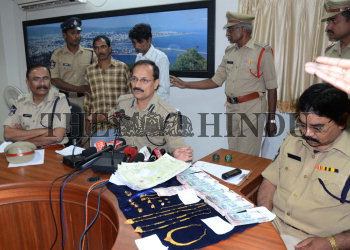 Caption : VISAKHAPATNAM, 12/11/2011: Deputy Commissioner of Police (Law and Order) B. Balakrishna presenting the accused in the fake notes circulation racket, at a media conference in Visakhapatnam on November 12, 2011. Two persons who were allegedly circulating fake currency notes were arrested. Fake and original notes and some ornaments purchased by them were recovered. Photo: C.V. Subrahmanyam