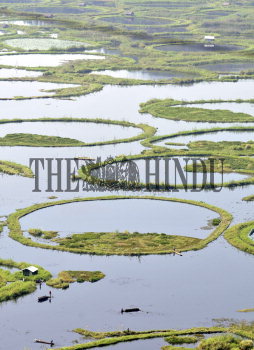 Caption : MANIPUR?10-11-2011 A view of the Loktak Lake- the largest freshwater lake in North- Eastern India and also called as the only Floating lake in the world due to the floating ?Phumdis? (heterogeneous mass of vegetation, soil, and organic matters at various stages of decomposition) on it in Moirang area of Manipur state. This ancient lake plays an important role in the economy of Manipur. It is considered to be the lifeline for the people of Manipur due to its importance in their socio-economic and cultural life, besides influencing the climate of the State. It serves as a source of water for hydropower generation, irrigation and drinking water supply. The lake is also a source of livelihood for the rural fisherman who lives in the surrounding areas and on phumdis. Considering the ecological status and its biodiversity values, the lake was initially designated as a wetland of international importance under the Ramsar Convention on March 23 1990. PHOTO: RITU_RAJ_KONWAR