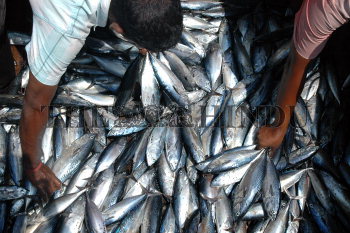 Caption : KOCHI, 11/06/2007: Commonly know as ĪChicken of the seaā, Tuna forms the second largest product in international SEAFOOD trade with about 9 per cent of the total trade in value terms and 15 per cent in quantity. World tuna landings touched record high of 4.3 million tonnes in 2005. Valuable both in domestic and foreign markets, tuna plays a vital role in the economy of the country, as per the studies by Central Marine Fisheries Research Institute (CMFRI). Photo: K.K. Mustafah