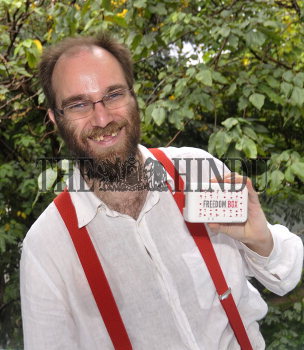 Caption : BANGALORE, 04/11/2011: Free world: Danish technologist Jonas Smedegaard talks about his pet project that aims to take online interactions off the cloud and centralised servers owned by corporations. Smedegaard holds in his hand a box that's no larger than a power adapter and much lighter than an average laptop charger. A Danish technologist and a well-known Debian developer, Besides being among the key developers involved for over a decade in the evolution of Debian, the Free Linux distribution, his ?stardom' has a lot to do with the year-old collaborative project that he is part of: the FreedomBox. With its promise to decentralise information and power by simply taking online interactions off the cloud and the centralised servers owned by corporations, the FreedomBox has been one of the most-talked-about projects in recent times. The Box runs on an ARM chip (however, it is not tied to this chipset) and has a 512 MB RAM. The device will run on the Debian Operating System, customised to provide privacy tools with an extremely simple user interface. Photo:K.Bhagya Prakash