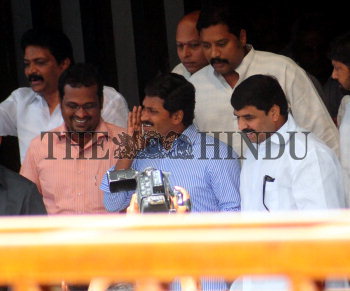 Caption : HYDERABAD, 04/11/2011: President of YSR Congress Party, Y. S. Jaganmohan Reddy (blue shirt), on his way to appear before Central Bureau of Investigation (CBI) over the illegal mining scam by former Karnataka Minister Gali Janardhan Reddy, in Hyderabad on November 04, 2011. The CBI served notice on Jagan under section 160 of the Criminal Procedure Code, to face questioning on his role in the allotment of mining lease to Gali owned Obulapuram Mining Company, since it was suspected that the file was cleared under political pressure during YSR's Chief Ministership. Photo: Mohammed Yousuf