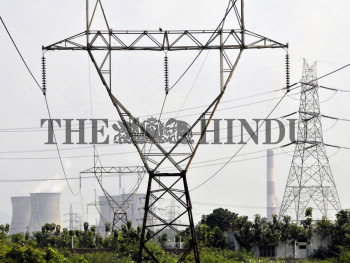 Caption : HYDERABAD (AP) -28-09-2011 - BL/ POWER SITUATION GRIM IN ANDHRA PRADESH / STAND ALONE PIC : With coal supplies from SINGARENI Colleries continuing to be inadequate to fully operate thermal power generation in Telangana , power cuts have been imposed both for domestic and industrial sectors as workers are on general strike -Sakalajanula Samme for separate Statehood. The Kothagudem Thermal Power Stations in Palvancha in Khammam District of Andhra Pradesh are seen in operation in half their capacity . The hydel generation from Nagarjuna Sagar , Srisailam is augmenting power supply as there have been good rains . The State is borrowing power from the Central Grid on swap basis . The power situation has worsened on Wednesday . PHOTO: P.V.SIVAKUMAR .