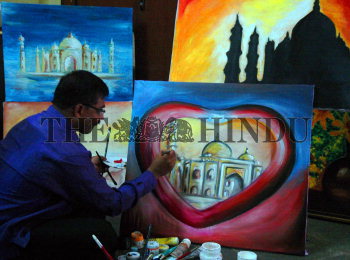 Caption : HYDERABAD, 10/06/2007: Surarchit Reddy (known as Vijay), a city based art teacher engaged in making paintings of the Taj Mahal which will be later display at an exhibition at the state art gallery in Madhapur, Hyderabad in order to create awareness and generate support for the movement to get the Taj Mahal voted as one of the seven wonders of the world. The contest is being organised by UNESCO and the result will be declared on July 7. Till Sunday, the Taj Mahal was at tenth position and needs to finish among the top five. The total votes cast in favour of the Taj Mahal stands at five crores at present, out of a population in excess of one billion Indians. Photo: Mohammed Yousuf