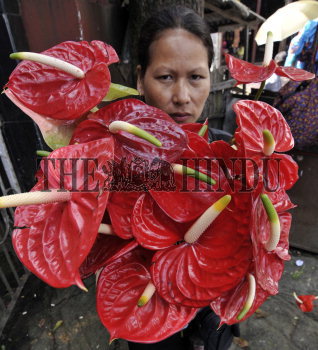 Caption : AIZAWL, 29-10-2011:A Mizo woman sales anthodium flowers in Treasury square market in Aizawl city capital of Mizoram state, northeast India on October 29, 2011. Mizoram is one of the largest producer of anthurium in India. Due to favourable climatic conditions, the anthurium flowers produced in Mizoram are among the best in the world. Apart from other house hold activities Mizo women run all the markets in Mizoram. In Mizoram ninety five percent of the business activities is controlled by the women. The social and economic changes combined with modernization should help the Mizo women overcome many of the social barriers which are engrained in the patriarchal culture of Mizo society. There are attempts for empowerment of women through legislative reforms. But in so far as the election scenario both at the level of the village council and assembly is concerned, women's participation in political decision-making is still a far cry away. Photo:Ritu Raj Konwar