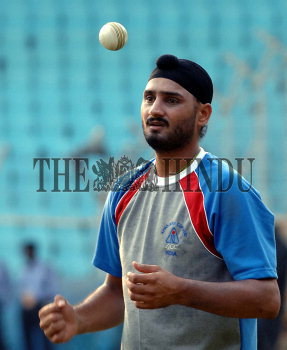 Caption : CHENNAI: 08/06/2007: Asian XI's Harbhajan Singh prepares to bowl during a practice session on the eve of the second ODI against Africa XI at the M.A. Chidambaram Stadium in Chepauk, Chennai, on June 08, 2007. The opening cricket match between Asia XI and Africa XI was played in Bangalore on June 06, 2007 and the remaining two matches would be played at Chennai on June 09 and 10. Photo: K. Pichumani