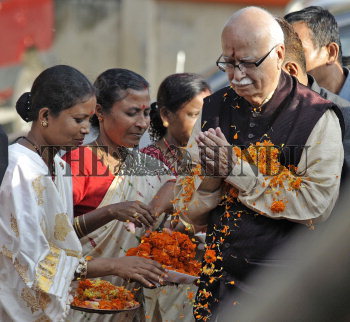 Caption : GUWAHATI, 20-10-2011:Senior Bharatiya Janata Party (BJP) leader LK Advani is being welcomed by flowers by the party workers as he arrives to address a public rally as part of the party?s Jan Chetna Yaatra in Guwahati on October 20, 2011. L.K. Advani is leading the ?Jan Chetna Yatra? for good governance and clean politics. The Jan Chetana Yatra is being organised by the BJP to give a voice to the deep distress in the society which is disgusted with the series of scams causing massive loot of public money in the ruling UPA regime. The yatra is to create awareness among the people about the need to establish an accountable, transparent democratic system which is sensitive to the problems facing the common man and is free from corruption. The rule of law, transparency in administration and people?s participation will also be the principle themes of this Yatra. Photo:Ritu Raj Konwar