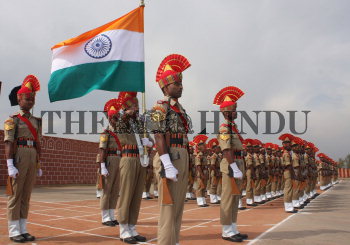 Caption : SRINAGAR, 20/10/2011: Border Security Force (BSF) soldiers take part in a passing out Parade in Humhama on the outskirts of Srinagar on October 20, 2011. Around 339 recruits were formally inducted into the BSF after completing 38 weeks of training. The BSF has so far trained 10335 recruits since its inception and that includes 1749 Kashmiri youth, including surrendered militants who are now performing their duty in various parts of India. Photo:Nissar Ahmad