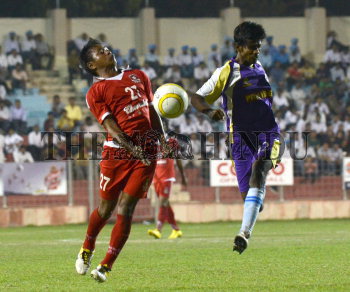 Caption : NEW DELHI, 17/10/2011: Jerry Zirsanga (27) of Churchill Brothers and Gouranga Biswas (12) of Prayag United in action during the final match of the 124th Durand Cup Football Tournament 2011 at the Ambedkar Stadium in New Delhi on October 15, 2011. Photo: Shanker Chakravarty