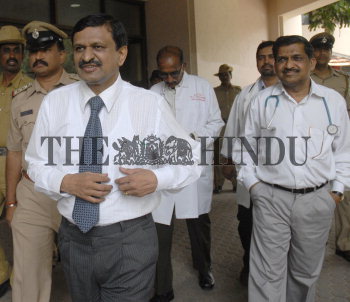 Caption : BANGALORE, 16/10/2011: Dr.CN.Manjunath, Director, Sri Jayadeva Institute of Cardiovascular Sciences and Research, addressing the media regarding the Health condition of former Karnataka Chief Minister B.S. Yeddyurappa, who is being treated in the ICU of Jayadeva Hospital, in Bangalore on October 16, 2011. B.S.Yeddyurappa, who was sent to judicial custody on Saturday, has been shifted to Jayadeva Hospital from jail in the early hours of Sunday, after he complained of chest pain. Photo: K.Murali Kumar