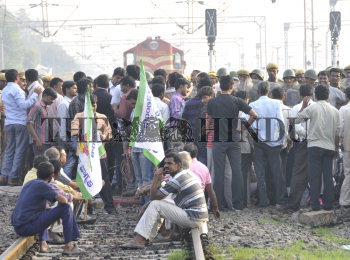 Caption : HYDERABAD (AP) -15-10-2011 - 72 HOUR 'RAIL ROKO' IN TELANGANA : -Telangana supporters block the railway tracks in Hyderabad on Saturday as the 72 hour 'rail -roko' called by Telangana JAC got underway . The AP Police have stepped up security to run trains in the Telangana Region even as South Central Railway has cancelled and diverted over 56 trains running in this region . PHOTO: P.V.SIVAKUMAR .