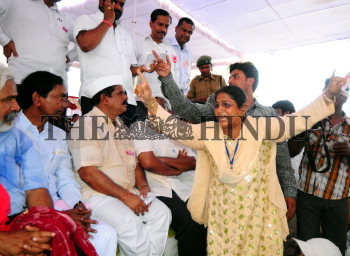 Caption : HYDERABAD, 11/10/2011: Statehood Ambition: A woman requesting Telangana Rashtra Samithi President K. Chandrasekhara Rao to protect the interests of minorities and that political parties should take up the welfare program for the benefit of community after Telangana state was formed, at mammoth congregation of Telangana Joint Action Committee of employees, Teachers and Workers during day long sit in organized as part of 'Sakala Janula Samme', the political Telangana Joint Action Committee meeting demanding separate state, in Hyderabad on October 11, 2011. Photo: Mohammed Yousuf