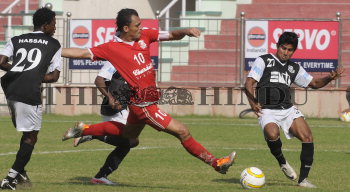 Caption : New Delhi, 10/10/2011: Roberto Silva of Churchill Brothers in action against Mohammedan Sporting's Sudip Das (no-27) and Adeola Hassan (no-29) during the Durand Cup Football Tournament at Ambedkar Stadium in New Delhi on October 10, 2011. Photo: S_Subramanium