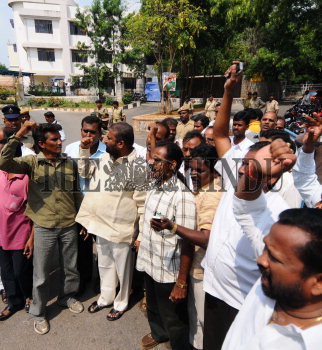 Caption : HYDERABAD, 10/10/2011: Angry Telangana RTC Employees' Joint Action Committee activists raising slogans against National Mazdoor Union of APSRTC which reached for an agreement with Government to call off 22 days old strike, outside the Banjara Hills Minister's quarters in Hyderabad on October 10, 2011. More than 10,000 buses, 60,000 drivers and other employees continued remained off the road in state capital and nine other districts of Telangana region causing a daily loss of Rs.70 million to the corporation. Photo: Mohammed Yousuf