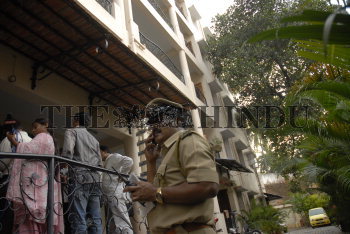 Caption : BANGALORE, 07/10/2011: S.Anasuya (40), a cashier of State Bank of Mysore's Serpentine Road Branch, was allegedly murdered by the watchman of Polo Garden apartment, where she was living with her husband and two daughters from last four years, in Seshadripuram Police Station limits, in Bangalore on October 07, 2011. Photo: K.Murali Kumar