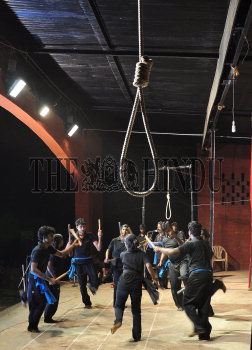 Caption : MADURAI, 02/10/2011: SLEEPLESS STIR: An event to express solidarity, opposing the death penalty to the three persons indicted in the Rajiv Gandhi assassination case, was organised at the TTS Grounds Arasaradi in Madurai, where the protesters commenced their stir at 6 p.m. on Saturday and ended at 6 a.m. on Sunday October 02, 2011. Photo:S.James