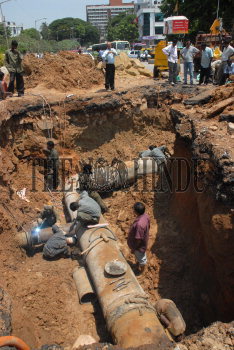 MAJOR REPAIR WORK TO STOP THE LEAKAGE OF WATER OPP

Caption : BANGALORE, 06/06/2007: Major repair work to stop the leakage of water opposite to Gurdwara near Ulsoor lake in Bangalore on June 06, 2007 choked the traffic movement for some time and traffic is diverted to make way for the repair work to go on without any hindrance. Photo: K. Gopinathan