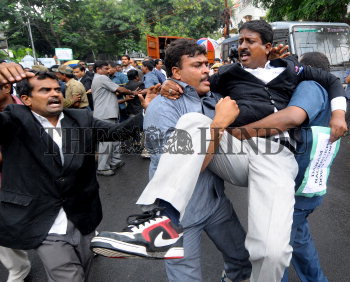 Caption : HYDERABAD, 29/09/2011:Police detains agitating lawyers when they tries to storm into high profile cabinet Minister for Labour Danam Nagender bid to lay siege houses of congress legislators other leaders as part of called given by Telangana Joint Action Committee to intensify the ongoing movement for separate state, in Hyderabad on September 29, 2011. Photo: Mohammed Yousuf