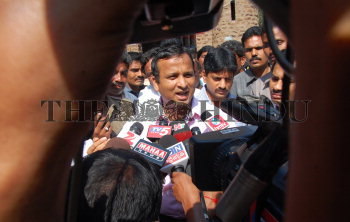 Caption : VISAKHAPATNAM, 28-09-2011:District Collector Lav Agarwal addressing the media after discussion leaders of politial parties and fishermen organisations from Rambilli and S. Rayavaram mandals facing displacement by the setting up of Naval Alternate Operational Base (NAOB) who laid siege to the Collectorate at Visakhapatnam on September 28, 2011, demanding a better relief and rehabilitatoin package and construction of fishing jetty. The fishermen came in a PADAYATRA from Rambilli, about 50 km, from the city that started on Monday. Photo:C.V.Subrahmanyam