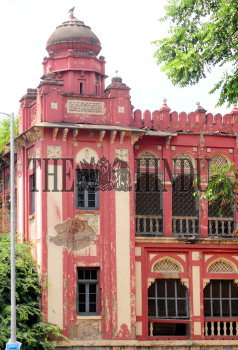 Caption : HYDERABAD, 27/09/2011: IN RUNS: The damaged dome and peeled off plaster stand testimony to the dilapidated Government City College structure in Hyderabad's old city in Hyderabad on September 27, 2011. The Nizam Mahbub Ali Khan, Asaf Jah VI of Hyderabad established the first city school in the name Madarsa Dar-ul-uloom as early as 1865, later Nizam Osman Ali Khan, Asaf Jah VII, converted it into a City High School. The school moved into the present grand building in 1921. Intermediate sections of Osmania University with 30 students were introduced in 1921 under the supervision of the high school with Urdu as the medium of instruction. In 1929, the school was upgraded to a college and was named as ?City College? and became a constituent college of Osmania University. Photo: Mohammed Yousuf